Steve Van Zant, a key figure in the expansion of charter schools in San Diego County and elsewhere in California, pleaded guilty Thursday to a felony violation of the Political Reform Act. Van Zant’s financial interests in growing independent charters, and his efforts getting them into school districts without notification, have raised questions about widely perceived shortcomings in state law that now even advocates say allow for exploitation. While superintendent of the rural Mountain Empire Unified School District, Van Zant received a stipend through his contract for each charter school the district authorized. The arrangement was in violation of conflict-of-interest laws, said Deputy District Attorney Leon Schorr, who heads the public integrity unit.

“This plea shows that they have to be cognizant of how government funds are spent,” Schorr said. “This felony has a huge impact on Mr. Van Zant — professionally, personally and financially.” 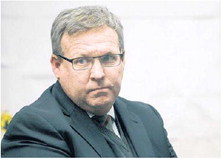 FROM A1 agreement, Van Zant must reimburse Mountain Empire for the charter stipends that amounted to an estimated $50,000 to $60,000. The agreement also calls for him to serve 30 days of home confinement with an electronic monitor, five years’ probation, and 300 hours of community service. Van Zant and his attorney, Garland Peed, declined to comment after a Superior Court hearing Thursday. However, Van Zant said “there will come a day” when he’s willing to discuss the matter. Under Van Zant’s leadership, Mountain Empire authorized 13 charters that were located in other districts, in some cases without notifying those districts in advance. The arrangements have stirred costly legal fights and animosity among districts that has lingered since Van Zant resigned from Mountain Empire in 2013. By approving charters for other districts, Mountain Empire earned a percentage of revenue (up to $500,000 a year under Van Zant) from the charters without losing its own students to those schools— or the average daily attendance money they generate from the state. Meanwhile, Van Zant received the equivalent of 5 percent of the revenue brought in from each charter under his stipends.

Some of the charters went on to hire Van Zant’s consulting firm, EdHive, which charged as much as $100,000 to provide back-office services among other billable offerings. According to the business website, “We can find an authorizing district for your charter and cut a deal that provides the financial incentive for the district and still save your school money.”

Van Zant continued to run EdHive since he took office in 2013 as superintendent at the Sausalito Marin City School District, a three-day-a-week job that paid $172,000 in 2014. The terms of Van Zant’s plea agreement required his resigplea nation from the district, which he submitted earlier this month.

Before Van Zant was hired in Mountain Empire in 2008, he ushered in charters while superintendent of the onecampus Dehesa School District. Dehesa has approved more than a dozen charters and charter resource centers to operate throughout San Diego County, raising questions about its small staff’s ability to provide proper oversight of the schools.

A handful of other small and cash-strapped districts throughout eastern San Diego County have approved dozens of mostly independent- study charters to operate outside their boundaries. Similar trends have sprouted up in other pockets of California, some with assistance from Van Zant’s EdHive.

“While it would be incorrect to assume that a highprofile instance such as this is reflective of the broader charter school movement, this case does bring to light legitimate concerns about authorizer accountability and the urgent need for greater public transparency in financial agreements between charter schools and authorizers,” the association said in a statement to The San Diego Union-Tribune.

Although the charter association has opposed past legislation that would limit districts’ abilities to approve charters in other districts, it said it will work to reform the system in away that is fair to upstanding charters.

“Our top priority in this legislative cycle is to address the broken authorizing system across the state that currently unduly intrudes on good charter schools while failing to hold negligent authorizers accountable,” the association said.

The questions and controversy over charter schools are mounting in advance of the 25th anniversary of the California Charter School Act of 1992, a law that was celebrated at the time as a way to breathe innovation and choice into public education.

Gov. Jerry Brown vetoed legislation in 2014 that would have imposed restrictions on where charters can be located, instead assigning a team to research the matter. A state spokesman said the charter research is still under way. New legislation from Sen. Fran Pavley, DAgoura Hills, would prevent financially troubled districts from authorizing charters outside their boundaries.

Charter advocates and critics alike have closely watched the Van Zant case amid a charter school growth spurt in San Diego County. In the 2008-09 academic year, 38,680 students attended 73 charter schools in the county. This year, 69,685 students are enrolled in 124 charters.

The District Attorney’s Office last month filed the felony conflict-of-interest charge against Van Zant for an undisclosed incident on or about May 12, 2010. That’s the day Van Zant’s charter incentive kicked in, but on Thursday Superior Court Judge Daniel Link also made a brief reference to the school board’s approval of the Academy of Arts and Science Charter, which occurred around the same time at Van Zant’s urging.

The seven members of the Mountain Empire school board have declined repeated requests for comment on the stipends they approved in Van Zant’s contract.

Link scheduled a sentencing hearing for April 6. Van Zant does not face prison time. The plea agreement will require Van Zant to forfeit some of his retirement earnings accrued while his stipend was in place.