Laura Davis woke up on a sidewalk in downtown San Diego on Monday morning, pulled back the blanket she used as a makeshift tent and looked to her side.

The two bags that held the bulk of her possessions were missing.

The apparent theft was frustrating, a setback — and not uncommon for homeless people on the street. Davis said a friend of hers recently lost her children’s birth certificates and other important documents to thieves in the night.

“You need storage facilities so people can get out of being homeless,” she said. “It almost feels like society wants to keep people homeless.”

Help may be coming within a few months. Mayor Kevin Faulconer announced in his State of the City address last week that the city plans to open a second storage facility for homeless people this spring, an addition that would more than double what is available now.

Details were sparse in the speech, but Faulconer spokesman 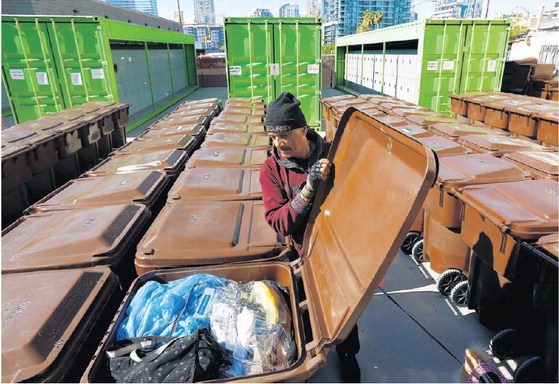 Danny McCray is the site supervisor for Transitional Storage Center, a facility at 252 16th St. that provides storage bins for homeless people. It opened in 2011 and since 2012 it has been operated by the nonprofit Think Dignity. 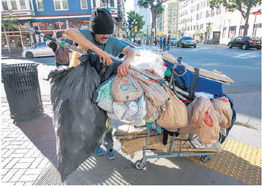 David Sandoval, who has been homeless for three years, adjusts his belongings in a shopping cart on Saturday.

FROM A1 Greg Block said Friday that the new facility will be in a 25,000-square-foot, twostory building at 20th and Commercial streets with space for 700 to 1,000 storage bins.

The second floor will have public restrooms, and the facility will be run by the San Diego Housing Commission, which will hire an operator to manage it, Block said.

Besides helping keep sidewalks clear and protecting property from being stolen, the new facility will allow homeless people like Davis to look for work and go to other appointments.

“I have a job interview Thursday at Forever 21, and I don’t know what I’m going to do with all my stuff,” she said.

The mayor’s announcement about the new facility comes at a time when the city is facing a class-action lawsuit over arrests and citations of homeless people for having tents and other property in the public right of way.

Scott Dreher, the attorney who filed the suit last year with partner Kath Rogers, has helped transform city policies toward homelessness through previous settlements and said the storage facility could lead to a resolution of the latest suit. “It came up in connection with the lawsuit,” he said about discussions he has had with the mayor. “He wanted us to know they were doing this, and we said, ‘That’s a great idea.’ ” The suit argues the city is improperly citing homeless people for violating an encroachment ordinance originally intended to prevent such things as restaurants putting large planters on sidewalks.

“This will be really big,” he said. “It will be nice to have a win-win.” In 2007, Dreher and attorney Tim Cohelan sued the city for arresting homeless people for illegal lodging, arguing that they had no choice other than to sleep outside because there were not enough shelters. The suit was settled when the city agreed homeless people would not be arrested between 9 p.m. and 5:30 a.m. unless offered a shelter bed.

In a 2011 lawsuit, Dreher argued the city and the Downtown San Diego Partnership had unlawfully seized and thrown away homeless people’s property found in the public right of way.

A settlement in that case required the city to provide at least three days notice before sweeping homeless encampments and to set up a storage facility that will give homeless people a place to store their things.

The Transitional Storage Center for homeless people opened in 2011 at 252 16th St. as a result of the settlement, and since 2012 it has been operated by the nonprofit Think Dignity. Danila Hendrix is among the homeless people thankful for the facility, which she has used for two years. “I walked with my stuff in a stroller, and I couldn’t leave it,” she said, describing the physical toll that caring for her property took. “I had to take it everywhere. That’s why I have two tears in my meniscus (cartilage in the knee).”

Besides storing property checked in by homeless people, the facility also stores for 90 days any unattended property picked up by Downtown San Diego Partnership’s Clean and Safe program crews after a threehour notice.

“No duh they could use another one,” she said upon hearing of Faulconer’s announcement.

The Transitional Storage Center usually has a waiting list of about 130 people, she said.

Rios said she was surprised to hear of the mayor’s plan because she had been asked twice by his office last year to prepare a budget for opening a new storage facility, and nothing came of it.

“But you know, kudos for the city for recognizing there should be a place for homeless people to place their stuff,” she said. “I would say we’re a little surprised that we weren’t approached first-hand because we already run those programs, but besides that, I’m happy.”

On Monday morning, Transitional Storage Center site supervisor Danny Mc- Cray produced a volume of papers that clients had filled in about the facility.

“It allowed me to hold onto my most cherished possession,” read one. Others wrote the center gave them peace of mind and allowed them to look for work.

The center has 304 metal lockers and 96 80-gallon plastic bins, filled with clothing, shoes, books, toiletries and other personal items.

A man who gave his name as Blessed said he’s thankful for the chance to store his things.

“These lockers are superimportant,” he said. “I have a guitar in here and make money with it. And I have some interview clothes. I’m trying to do the right thing. I’m trying to get a job.”

With a waiting list of more than 100 people, Mc-Cray said people are turned away every day.

Kimberly Buchanan is among the people still waiting. In frail health— she has a hernia and said the raw patches on her arm are from lupus — Buchanan struggled to carry out a large bag weighed down with clothes, bottled water and other items.

“They stole everything else,” she said. “I just have stuff to wear. Every night, you get ripped off if you go to sleep.” 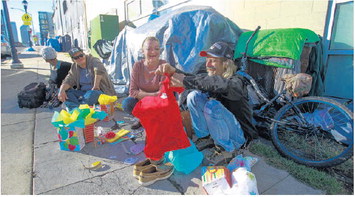 Robin Phillips, who said she was homeless and now lives in a shelter, laughs as she gives a birthday present last week to her friend Paul Miller, who is homeless.