ENCINITAS’ LOW-INCOME HOUSING LIST TO BE COMPLETE NEXT MONTH

Encinitas city officials are one step closer to resolving a conflict with the state over the city’s lack of a current housing plan, and they plan to meet again next month.

Mayor Catherine Blakespear said she felt “really positive” about what they accomplished during a fourhour, weekend session and believes they could finalize in January their proposed list of sites where new low-income housing will be allowed. She wasn’t the only one feeling upbeat. Bruce Ehlers, who was one of the leaders of the group that opposed the city’s previous housing proposal, said he also thought Saturday’s session went well.

“It was a good, collaborative meeting,” he said.

Encinitas is under the gun to get its housing plan done as soon as possible. It’s the only city in San Diego County, and one of just a few cities in the state, that doesn’t have a state-certified Housing Element— a statemandated document that spells out how a city proposes to accommodate its future housing needs, particularly those of low-income residents. Various efforts to resolve the situation have faced conflict in the past and the city has rebooted the process multiple times. The most recent proposal was the Measure T plan, which the city’s voters rejected in November 2016. After it failed, the council created an ad-hoc committee and asked it to revise Measure T and create something more palatable that could go before voters in 2018.

Ehlers, Blakespear, Councilman Tony Kranz and ballot measure proponent Kurt Groseclose all serve on the ad-hoc committee. Saturday’s special workshop meeting was presided over by both the subcommittee members and the full City Council.

The goal was to identify properties that could be rezoned, thus allowing them to accommodate extra housing and help the city fulfill its state low-income housing requirements. The city’s aiming to have a housing plan that calls for accommodating 1,600 new housing units, so it can meet its new state standard and have a bit of a buffer.

During Saturday’s session, council members and committee representatives tentatively picked enough sites to accommodate a total of about 1,200 units and they hope to finish the job during the City Council’s Jan. 10 meeting, Blakespear said.

“BytheendofJanuary, we need to give a list to our consultant to do the more rigorous analysis required (for state approval),” she added.

One big potential sticking point is a change to state law that takes effect Jan. 1. It requires cities to set aside a certain percentage of vacant, or nearly vacant, land to meet future low-income housing needs rather than relying totally on redeveloping previously built-upon land. Because of this pending change, some sites proposed in the Measure T plan now must be eliminated, particularly ones along Coast Highway 101, city officials said.

At Saturday’s session, council members also agreed not to include some sites that have been controversial of late, including cityowned land along Quail Gardens Drive, the Dramm & Echter Inc. flower-growing property and a former trashburning area owned by the county. Places that remain on the tentative list include the Sunshine Gardens nursery property at the corner of Encinitas Boulevard and Quail Gardens Drive, and some of the strawberry-growing farmland along Manchester Avenue east of Interstate 5.

Henry is a freelance writer. 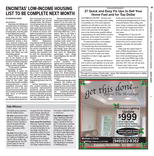